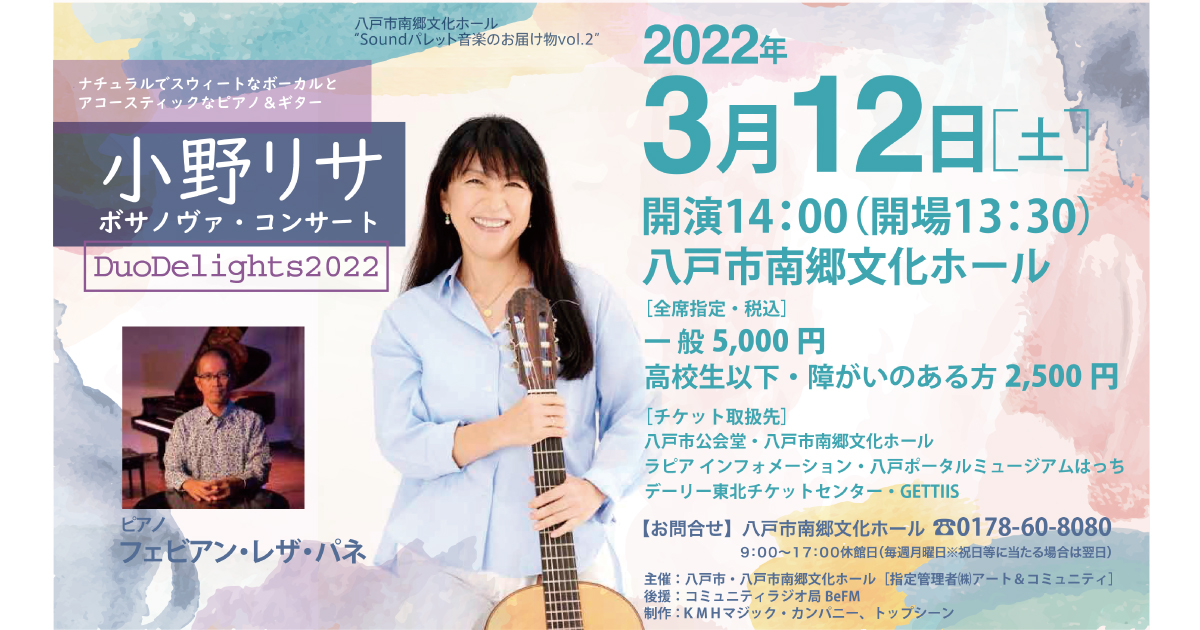 December 22, 2022 (Wednesday) The number of tickets handled has been added.

Born in Sao Paulo, Brazil in 1962. He spent up to 10 years in Brazil and started singing while playing the guitar at the age of 15.

CD debut in 1989. With a natural singing voice, rhythmic guitar, and a charming smile, bossa nova spreads all over Japan in a blink of an eye.

He has performed with Antonio Carlos Jobim, the god of bossa nova, and Joan Donado, the master of jazz samba, and has been actively performing in Newyork, Brazil, and Asia and Oceania.

In 1999, the album "Dream" recorded more than 200,000 hits, and has won the Japan Gold Disc Award "Jazz Category" four times. In 2013, he was awarded the Rio Branco National Medal by the Brazilian government, and has made his position as a leading bossa nova in Japan immovable.

From 1986 to 7 years, he released "Seaside Sati" and 8 other albums (neo chic series) and a collection of Christmas songs by solo piano, attracting attention as a pianist and arranger.

Since then, he has participated in concerts and recordings by many artists such as Taeko Ohnuki, Lisa Ono, and Ikuko Kawai, and has a reputation for his delicate and sharpened unique piano touch and tone.

In 2003, he launched his own label "Amphibian" and released mainly solo piano albums.

Daughter of Ipanema / A Whole New World / Jambalaya and others

If you have a disability (person with a disability certificate, attendant), please purchase from other ticket agencies.

・ Please fill in the contact information on the ticket. (Name, address, phone number)

* The personal information you provide will not be used for anything other than infectious disease control.

・ Please cooperate in wearing a mask, measuring the temperature before entering, disinfecting alcohol on your hands, and physical distance.

* If the temperature is 37.5 ° C or higher at the time of temperature measurement, you will not be able to enter. (Tickets will be refunded.)

・ To avoid confusion, please follow the staff's instructions when entering and exiting.

・ Performance status and infectious disease countermeasures may change depending on the spread of new coronavirus infections.